How to Throw a Knockout Punch 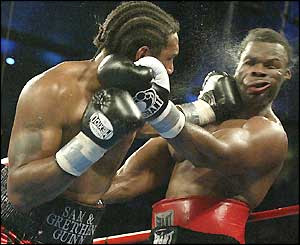 A knockout punch can end all contests decisively. It can finish fights without dispute and can save your life in grave circumstances. A fighting sports athlete needs it when he is awfully down on points; an up and comer wants to have a lot of wins through knockouts to boost confidence and create an intimidating image. Some people just want that knockout punch to end things in their favor and end things fast. True, the knockout punch is a tool that every fighter should have in their repertoire. It can be used as intimidation and insurance.

But before we get into the details on what makes a knockout punch, we must first understand the anatomy of the knockout.

What is a Knockout? How does it happen?

Ok, I am not a scientist or some medical guy but I know a lot about this phenomenon called the knockout. Through research, experimentation and painful experience, I have gained enough knockout knowledge and will express it here in very simple terms.
A knockout is something that occurs after a physical blow which renders a person on the receiving end immobilized or disoriented. Although not necessary, a knockout often implies unconsciousness. Therefore, any kind of hit to any part of a body that stops an opponent from doing functional movements for a relative amount of time is considered as a knockout. A body punch can knock the wind out of you; a roundhouse kick to the face can make you see stars. 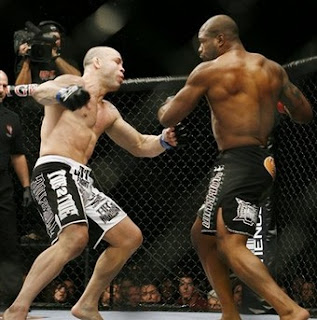 However, this article will specifically talk about the knockout punch and to be more exact, a knockout punch to the head. When your head is hit with a punch, the brain floating in your skull absorbs the impact. The more powerful, unexpected, and accurate the punch… the more devastating the knockout will become.
Back to the brain… This floating organ in our head is like a rodeo cowboy and goes with flow whichever direction our head goes. A sudden powerful hit will jerk your head so violently that the floating brain will bounce around in the skull hitting the bony walls. This is what you call trauma and it will make the nerves all over your body go in an electrical haywire. In effect, your body will go limp or may sometimes do uncontrollable jerky movements and in many cases, you will be out only to wake up with a mammoth headache.

How to execute a Knockout Punch

The knockout punch requires three elements – Power, Accuracy, and Surprise. These three can actually overlap each other as you can knockout punch someone with raw power alone even when you did not hit the opponent on the “button”. The same goes with accuracy; you can hit someone with less power but can still produce a knockout if you land accurately on the sweet spot. You can also knockout an opponent when you caught him completely surprised.
Power
This element is vital and when you can deliver lots of it, you are a fearsome creature inside and outside of the ring. Fighters with innate power to deliver knockout punches have what they call the “puncher’s chance”. They are capable of winning fights even when dominated because once they catch you with a clean shot at any point, you’ll get knocked out cold.
Some fighters are naturally vicious punchers and some aren’t. However, it doesn’t mean that you can’t improve it. The power of the knockout punch comes from the push and pivot of the feet, linking through the twist of the torso, to turn of the shoulder, and ends with the contribution of the arm muscles. It is the coordination of the whole body that gives power to the punch. Body mass do count due to the momentum. But if you do not have the coordination, you cannot effectively pull off a knockout punch.
This is why we have weight classes in fighting sports, simply because a 200 pound guy with proper punching mechanics will produce more bone-crunching power than a fundamentally sound 130 pounder. Lower weights normally means less power but does not necessarily imply less knockouts because lighter fighters make it up with accuracy which leads us to our next point.
Accuracy
The “button”, “off-switch”, and “sweet spot” are terms given to the areas of the head that are very vulnerable for the knockout. If you are accurate in your punches and able to cleanly hit these spots, you can make your opponent take a premature nap. These so-called sweet spots are the chin, jaw, and the temple. A punch to the chin and jaw has more leverage therefore the head repositions more forcefully. A hit on the temple, on the other hand, disturbs your equilibrium.
The element of surprise is usually the main cause of sensational knockouts. A deceptive fighter capable of throwing punches at angles that cannot be seen is more likely to dish out potential knockout punches mainly because the opponent is not prepared to tense his neck and jaw muscles fast enough to receive the punch. The result is more violent snapping on the head, more brain trauma, and an express trip dreamland.
Now, if you are able to combine all the elements in a single knockout punch… that is something I’ve got to see!
Boxing MMA Tips UFC

Popular posts from this blog

Shadowboxing: All About It 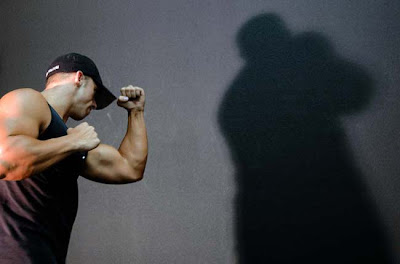 Everybody likes the heavy bag. You can hit it with all your might and as much as you want and with every hit, it gives you a feeling satisfaction. Since it is made to absorb enormous amount of impact, it will develop your power.
There are speed bags, double-end bags, banana bags, kick pads, power shields… They all have a place in fight training. These equipments, when used properly, improve accuracy, speed, and power. Each gear trains a specific area in your game. Example, double-end bags will develop accuracy and timing; power shields will enhance kicking power; speed bags will build shoulder endurance. Each one provides a different objective but they all have one thing in common…. You have a tangible target. You have something to hit.
Read more 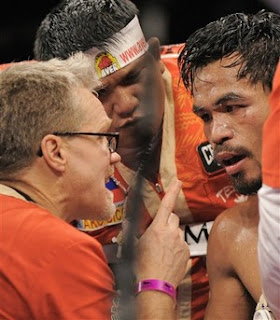 As many of you may have already known, Pacquiao is often surrounded with quite a number of people. His entourage is considerably large in numbers, and yes, even in boxing standards. This chosen crowd is dubbed as the Team Pacquiao but most of them are merely there for the champ’s longing for companionship and only a few of them have functional purposes.
In case you are wondering about the essential who’s who in Team Pacquiao, this list will certainly shed light on Team Pacquiao’s active (which means purposeful) members.